I Booked a Video Shoot: Now What?? – White Knight Productions
Skip to content

I Booked a Video Shoot: Now What?? 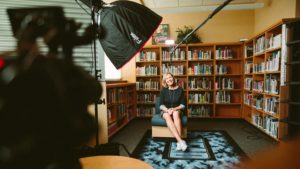 PREPARING FOR A VIDEO SHOOT

So, you’ve taken the plunge and booked a professional video production team to come in and shoot at your place of business. You’re excited, or maybe a little nervous… You’re investing both time and money into this venture. What are some of the steps you can take to ensure it’s successful and painless for everyone involved?

Organization is the key to a great video shoot – organization and schedule buffers. Here are some things to help you get prepared for your shoot day.

Weeks before the shoot, establish the following:

Your Schedule.
We love schedules. This schedule can contain the times and locations of each scene, the people involved in each scene, set up and tear down times, lunch break, etc. Note that the shoot may go longer than the scheduled time.

Days before the shoot, prepare these:

One of the key parts of a video is the location. It can set the mood or showcase an environment. The location is crucial. Most of the time, the bigger the room is, the better it is. A large conference room or classroom, with windows and carpeting, should be sufficient. A quiet room away from any noise is best. Water coolers and refrigerators tend to make a hum noise; they may need to be unplugged. Desk phones or intercoms should be disconnected when possible. The room doesn’t need to be empty; we might need room to move around the furniture though. Make sure there are plenty of electrical outlets in the room, with outlets on different fuses if possible. If the room lights require a key to turn on and off, have that key handy.

These little things can make all the difference between a great shoot and a rough shoot. The more prepared your location and people are, the less time it takes us to set up and start filming.

If you prefer checklist form, we’ve created that for you below.

____ Ability to turn off heating/AC

____ Ability to turn off lights and close blinds

____ Building aware of date and time of video shoot